State and local governments sell bonds to help fund ongoing expenses and finance public projects such as roads, sewers, schools, and stadiums. Because government entities have the power to raise taxes and fees as needed to pay the interest, municipal bonds are generally considered to be less risky than corporate bonds, so they typically offer lower yields.

Like all bonds, munis are rated for credit risk. A range of AAA down to BBB (or Baa) is considered "investment grade," and lower-rated or "junk" bonds carry greater risk.

In June 2017, credit rating agencies warned that Illinois could become the first state to have its debt downgraded to junk status if a budget was not enacted for the 2018 fiscal year. A severe budget crisis and a political standoff had left the state unable to pay its bills.1

Illinois lawmakers passed a $36 billion budget and a $5 billion income tax increase in July, which are expected to stabilize state finances in the near term.2 The three major rating agencies affirmed Illinois' investment-grade status, but warned that the state's fiscal challenges, which include more than $250 million in unfunded pension obligations, could continue to affect the state's credit in the long run.3–4

But despite fiscal problems in some cities and states, tax-advantaged muni bonds are a key portfolio component for many high-income investors with a relatively low risk tolerance, as well as retirees who depend on the stable income. 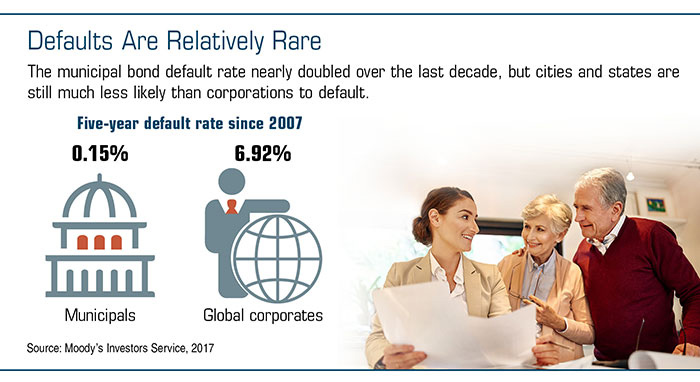 Municipal bond interest is generally exempt from federal income tax. If you live in the state where a bond was issued, muni interest is typically exempt from state and local income taxes as well. (The interest on a bond issued outside the state in which you reside could be subject to state and local taxes, and some municipal bond interest could be subject to the federal alternative minimum tax.)

Tax-exempt mutual funds earn interest from the state and local bonds they own, so they share the same federal income tax exemption. However, if you sell a municipal bond or tax-exempt fund shares at a profit, you could incur capital gains taxes.

The lower tax-free yields offered by muni bonds and tax-exempt mutual funds are often more valuable to investors in the top tax brackets. For example, a 3% tax-free yield is equivalent to a 4.62% taxable yield for an investor in the 35% federal income tax bracket.

If Illinois' credit rating were to fall into "junk" territory, it would raise the state's borrowing costs and rattle investors. Some mutual funds might not be allowed to buy the state's junk-rated debt, depending on the investment guidelines.5

In fact, the shaky credit situation in Illinois, which follows a series of defaults in Puerto Rico, highlights the importance of looking closely at any bond fund's underlying investments.

The return and principal value of bonds and mutual fund shares fluctuate with changes in market conditions. When redeemed, they may be worth more or less than their original cost. Bond funds are subject to the same inflation, interest-rate, and credit risks associated with their underlying bonds. As interest rates rise, bond prices typically fall, which can adversely affect a bond fund's performance.

This information is not intended as tax, legal, investment, or retirement advice or recommendations, and it may not be relied on for the purpose of avoiding any federal tax penalties. You are encouraged to seek advice from an independent professional advisor. The content is derived from sources believed to be accurate. Neither the information presented nor any opinion expressed constitutes a solicitation for the purchase or sale of any security. This material was written and prepared by Broadridge Advisor Solutions. © 2018 Broadridge Investor Communication Solutions, Inc.

Check the background of this firm/advisor on FINRA’s BrokerCheck.